I'm sorry for the gap in posting - I just haven't got around to it (if anyone has a round tuit, perhaps they could show me how to make one).
Also, I haven't been taking photographs:  we had a great time at Woodfest Wales at the end of July, lots of interest in our stand and so on, but I was too busy on the Saturday to take any pictures.  I did manage this one just before I went home:

Last Sunday we met in Betws yn Rhos to spin and weave - on opposing sides of the room. The spinners commented on the lack of chat from the weavers.  Well, we were concentrating.  Hard.


Jenny's little loom proved a bit of a challenge to warp for the first time: 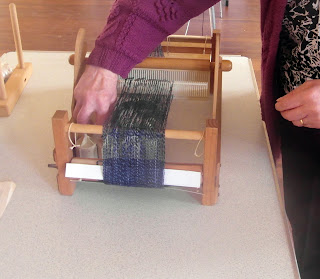 but after a team effort, she got going and produced her first piece of weaving (and it was enviably even).


Jenni and Edith were steaming ahead too, but my four shaft table loom took a bit more time.  (Update, Tuesday:  I am still denting the reed, and am about half way across.  It's linen at 12 ends per inch, so I think I'm excused the slow pace?) 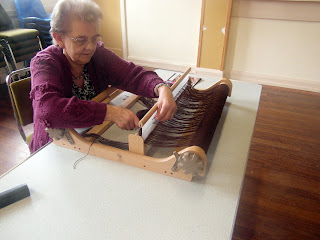 A good time was had by all - mostly.  We ought to admit to a certain amount of sighing and silent swearing and re-doing from the weavers, but everyone came away in an optimistic frame of mind.  I think.
Especial thanks are due to Paul for the outstanding Victoria sponge.  It was a real prize-winner, despite the alleged mix-up about the ingredients (I can't believe there was no baking powder in it).
Posted by Abergele Guild of Weavers, Spinners and Dyers at 10:01