Some of us have been busy...

We usually have an informal "show and tell" at our meetings, although we don't actually call it that as some people get very shy and develop acute stage fright at the very thought.
At our last meeting in Abergele Jenny P. made use of skills learned in Katie Weston's workshop, and produced a very superior cable yarn. 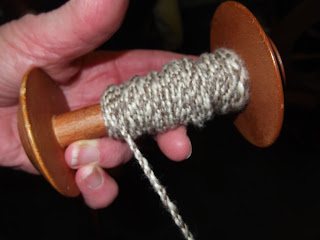 We were also delighted to see work by Val and Alan:  Val's chunky handspun, twined baskets made with aforesaid handspun, and Alan's amazing pinloom weaving, also made with aforesaid handspun.
Val says " if anyone asks, the cape was made from 1,100 yards of hand spun yarn. The brown is Zwartbles shearling, and the yellow is Jacob, white wool dyed in June with Weld and Alum.It was woven on a 5' square continuous weave frame, by Alan. It has a split front and buttonhole modification as part of the design. It has been fulled, also by Alan who has made a large button from Yew wood to fasten it. The cape weighs 1305g and is both warm and soft to wear." 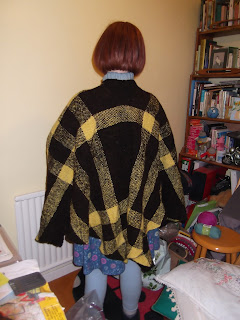