Notes from the Poppy factory

This year being 100 years since the end of the First World War, Wonderwool Wales has initiated a Centenary Textiles project.  The aim "is to produce a Community Textile Installation", with members of the public making textile poppies to commemorate those who died between 1914 and 1918.  The Abergele Guild has been working away, producing not only the traditional red Remembrance poppies but White Peace Poppies as well (which remember everyone, including civilians, who die in all conflicts past and future).

Patterns are provided for knitting and crochet, and for "cutting out" fabric to make the flowers:  http://www.wonderwoolwales.co.uk/show-events/curtain-of-poppies.html  and we are being very helpful (!) and attaching our poppies to i-cords of green wool.  The resulting strings of poppies will be posted off to Abergavenny for JaneVeevers to assemble into a curtain with all the other contributions from across the country.   (If anyone is tempted to start a poppy or two after reading this, please note that Jane wants everything to reach her by the end of March, in time for Wonderwool in April.)  All details are on the Wonderwool website, as per link above. 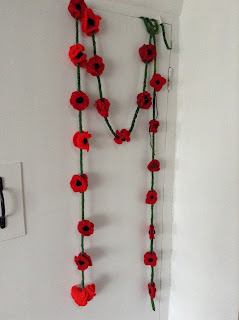 It's a little difficult to photograph two 2-metre-long strings of poppies, but I hope you get the idea...?
Many thanks to Bryn, Di and Margaret, and (in anticipation) to those of you who have made poppies but haven't given them to me yet! 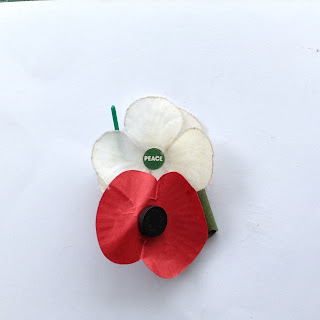